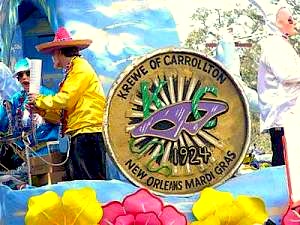 The Krewe of Carrollton has a long and storied history. Formed by a group of Oak Street businessmen in 1924, the Krewe’s modest beginnings over 80 years ago have been the foundation of a Carnival organization both widely known as a significant participant in the Carnival season, and was itself instrumental in fostering and assisting new organizations which adopted many of the Carrollton practices.

In 1924, a group calling itself “The Seventh District Carnival Club,” presented its first parade on Mardi Gras day of that year with J.W. Fordyce as its King.

Parading down Oak Street and around the Carrollton Avenue area of New Orleans, this club would continue to grow and eventually, in 1947, become known as the “Krewe of Carrollton“.

Carrollton is the Fourth oldest Carnival parading organization, behind (in order) Rex, Proteus, and Zulu. Even in its humble beginnings, Carrollton itself as an organization with bold and talented leadership. Carrollton’s original floats were built on the frames of garbage wagons bought from the City of New Orleans when the city started using motorized trucks.

The Krewe made a lasting place in history for itself when in 1933, with rain forcing the cancellation of almost all parades in New Orleans, including Rex; Carrollton was the only daytime parade of that Mardi Gras season.

The Krewe fell on hard times in the late 1930’s and coupled with the start of WW II, where Mardi Gras was cancelled in it’s entirety, the Krewe almost disbanded. However after the war, in 1947, the surviving members reunited and returned to its place in the Mardi Gras lineup. In 1948, Carrollton switched to parading on the First Sunday of the Mardi Gras Season. Carrollton has been famous over the years for many traditions and practices started by the Krewe.

The original parade route, starting from its Den on Oak Street remained for many years. In 1974, the starting point was changed to Canal Street in the Mid City area of New Orleans, to avoid having the floats going over an over pass. The route changed again in 1977 to the basic Canal Street route. In 1995 the parade was allowed to once again start from its den and travel the Uptown route. Since that time the route used has been the traditional Uptown Route.

Carrollton held onto many longtime traditions and practices, one of which was pulling a flatbed truck in its parade of floats, full of stuffed animals, which they dropped off for the children at Charity Hospital. That tradition stopped only after the parade route was changed again in 1977 and no longer passed in front of Charity Hospital.

In a tragic accident during the 1970 parade, an extremely high gust of wind toppled a float on top of the Jefferson Davis Parkway overpass, causing a krewe member to fall from the float and off that overpass and receive injuries from which he died. Coupled With that and other injuries due to that accident, all float riders in all parades are now required to wear safety belts.

Many other continuing Mardi Gras traditions and innovations began with Carrollton. One such milestone in its rich history was when Carrollton along with a few other Krewes bought and started using farm tractors to pull the floats instead of mules. In 1950, Carrollton was the first parade to ever be pulled by tractors. These 50 plus year old tractors are still in use today.

In order to make sure that our Royalty has a memento to remember their special year as reigning King and Queen, Carrollton started yet another tradition that remains today. The Krewe presents each King, Queen and Captain with a porcelain doll that is dressed in an exact miniature replica of their costume for that year. This tradition was started many years ago and continues today. The public can view one of the original sets of these dolls as it is on permanent loan to the City of Kenner’s Rivertown Mardi Gras Museum as one of their exhibits.

This Krewe has been instrumental in helping other parading organizations get off the ground. In 1957, the krewe assisted another notable parade, the Krewe of Zeus get started. Zeus was one of the first suburban parading groups, and recently celebrated its own 50th Anniversary.

Carrollton’s membership has expanded like the Krewe and now boasts of membership from across the country ranging from Boston to California.

Some of Carrollton’s newest membership was recently signed up while serving their country in Iraq with the Louisiana National Guard.

Even more recently, after hurricane Katrina devastated many of the Carnival organizations, the leadership of Carrollton was instrumental in not only producing one of the few first class parades “post Katrina” but also in assisting others to parade. Additionally, several key Carrollton members from outside of Louisiana lead a financial assistance drive to help needy members from New Orleans hurt badly by the storm.

Lead by its 4th Captain since 1947, the Krewe of Carrollton parades today on the second Sunday before Mardi Gras Day. Its membership is over 350 strong, owning and parading its own floats and Den. Although the route has changed over the years from a neighbor hood event in the Carrollton section of town, to the Mid City section of town, to its current traditional Uptown New Orleans route along St Charles Ave to Canal Street, the Krewe has maintained its identity and its image of being a Family Parade. The weekend that the parade rolls has become known as “Carrollton Weekend“.

We would like to cordially invite everyone to come and join us, and view our parade as we celebrate Mardi Gras, — “Carrollton Style“.